The “black truffle” or “black Périgord truffle” (Tuber melanosporum) is named after the Périgord region in France and grows with oak and hazelnut trees. Specimens can be found in late autumn and winter, reaching 7 cm in diameter and weighing up to 100 g. Production is almost exclusively European, with France accounting for 45%, Spain 35%, Italy 20%, and small amounts from Slovenia, Croatia and the Australian states of Tasmania and Western Australia (see below). In 1900, France produced around 1,000 metric tonnes (1,100 short tons) of Tuber melanosporum.

Production has considerably diminished in the past century, and is now around 20 metric tonnes (22 short tons) per year, with peaks at 46 metric tonnes (50 short tons) in the best years. About 80% of the French production comes from southeast France: upper Provence (départements of Vaucluse and Alpes-de-Haute-Provence), part of Dauphiné (département of Drôme), and part of Languedoc (département of Gard); 20% of the production comes from southwest France: Quercy (département of Lot) and Périgord. The largest truffle market in France (and probably also in the world) is at Richerenches in Vaucluse. The largest truffle market in southwest France is at Lalbenque in Quercy. 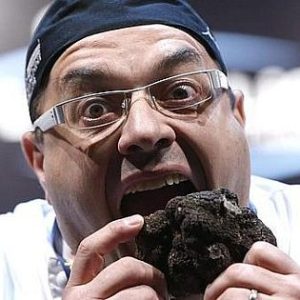